Are You Looking for the Truth

Are You Looking for Truth? 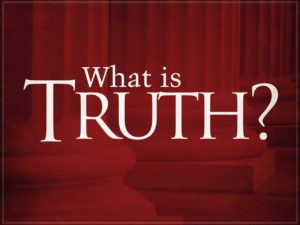 Someone asked me the other day would I want my daughter to hear or be subjected to some of the abusive comments that Donald Trump has been known to make to women. Of course, this question was asked because of the commercial that Hillary Clinton has been airing to encourage us to vote for her. I thought for a moment before I answered that question. Here was my response:

I take full responsibility for raising my own daughter and teaching her to keep her self-esteem intact by not allowing someone else’s derogatory words to determine how she feels about herself or how she conducts herself daily. While I don’t agree with the comments Donald Trump made towards certain women and about certain women, I do live in the real world. In other words, I recognize that when there are no women around, some men say things that make them sound like “pigs” (metaphorically speaking of course). A man who says abusive things to a woman or about a woman has his own set of issues. However, it is up to that woman to walk away. While I do respect Hillary Clinton’s accomplishments over the years, I don’t agree with the fact that she uses a commercial that sends a message that women cannot take full responsibility for raising their own daughters to be smart, self-sufficient, and capable of dealing with men who say obnoxious and rude things.

During the presidential campaign, Donald Trump has said some very rude things about Hillary Clinton. Strangely enough, those abusive comments have not stopped her from campaigning, from excelling, or from forging ahead like a winner. The point I am making is that women are not victims and because a man says rude things, that does not determine whether we will be successful or not. In the commercial, Hillary Clinton makes it sounds as though Donald Trump is responsible for our daughter’s self-esteem. He is not. I trust that anyone who has daughters will take full responsibility for teaching their daughters to ignore, stay away from, or get away from men who spew insulting comments or press charges if the situation permits. We become victims not from being victimized, but by choosing to maintain a victim mentality and allowing others to treat us as such. As a woman, I find the comments appalling. As a confident woman, those comments will not affect my ability to win and achieve at the highest level in life. Donald Trump does not determine who I am or what I become.  He is one man.  Although words do have an impact, Donald Trump is not the first nor will he be the last man to make disparaging comments about women. The question is who is in control of your thoughts? Is it Donald Trump with his disparaging comments about women? Is it Hillary Clinton with her misleading commercial about the effect that Donald Trump will have on our daughters? Finally, is it us women collectively who can make our own personal decisions that rude or lewd comments will not prevent us from cheering each other on, lifting each other up with praise, and most importantly, saying kind loving things to our daughters and the daughters of our friends. Donald Trump cannot destroy the self-esteem of any female, when that self-esteem is put into her by the people who are closest to her.

While I understand that Hillary Clinton, is trying to become president. I disagree with the commercial that sets out to manipulate women and guilt men into thinking that one man can destroy the daughters of America. If Hillary truly cared about our daughters, as she does her own, she knows that instead of shielding your daughters from men like Donald Trump, it is smarter to teach them how to defend themselves against men like him. Make no mistake about it, that commercial was not about protecting your daughters. That commercial was design to manipulate your emotions of anger, fear, and guilt. Although, I’m not a fan of either one, I ask myself which would I rather have someone who’s trying to manipulate me using low energy emotions possible or someone is full of hot air that I can use as a teachable moment for my daughter, so that she will know the type of man she does not want.

I believe politicians should use necessary methods to win. However, using our daughters and making us fear for the safety of our children is manipulation on a whole new level.

In other words, using our children should be off limits. Attacking adults is one thing and in truth that’s what Donald Trump did. In the commercial, that Hillary Clinton keeps running, most of those comments were made to Rosie O’Donnell who is an adult woman that gives us good as she gets. Those comments were not directed toward children or anybody’s daughter. The other unsavory comments that Donald Trump made, during that time he was in the entertainment industry and if you are ever behind the scenes in the entertainment industry, to put it bluntly things get real tacky. Donald Trump verbally attacked adult women. Again, not condoning his behavior. He did not attack young girls as the commercial would have you believe. This is not about telling you who you should vote for. This is about taking a closer look and seeing things as they are not as someone is manipulating you into believing.